A Vertical Form Fill Seal Machine, also known as a VFFS, is a common bagging machine used to package goods into bags as part of a production line.

Just as the name suggests, this machine starts by helping to form the bag from roll stock. Then, the bag is filled with product and sealed in preparation for shipment.

These bagging machines can be configured in a multitude of ways and are available in a variety of sizes with different features. While the most common examples of VFFS bags might be potato chip bags, they can be used with liquids or dry goods in a variety of settings.

Vertical Form Fill Seal machines can run at very high speeds – nVenia's OHLSON Brand offers system speeds of up to 200 bags per minute on a duplex line. Because the machine is forming the bags from roll stock, each package costs significantly less than those utilizing pre-made pouches.

Here’s a quick look at the basic functions of the machine.

The initial step performed by the machine is forming the bag from the roll of film. 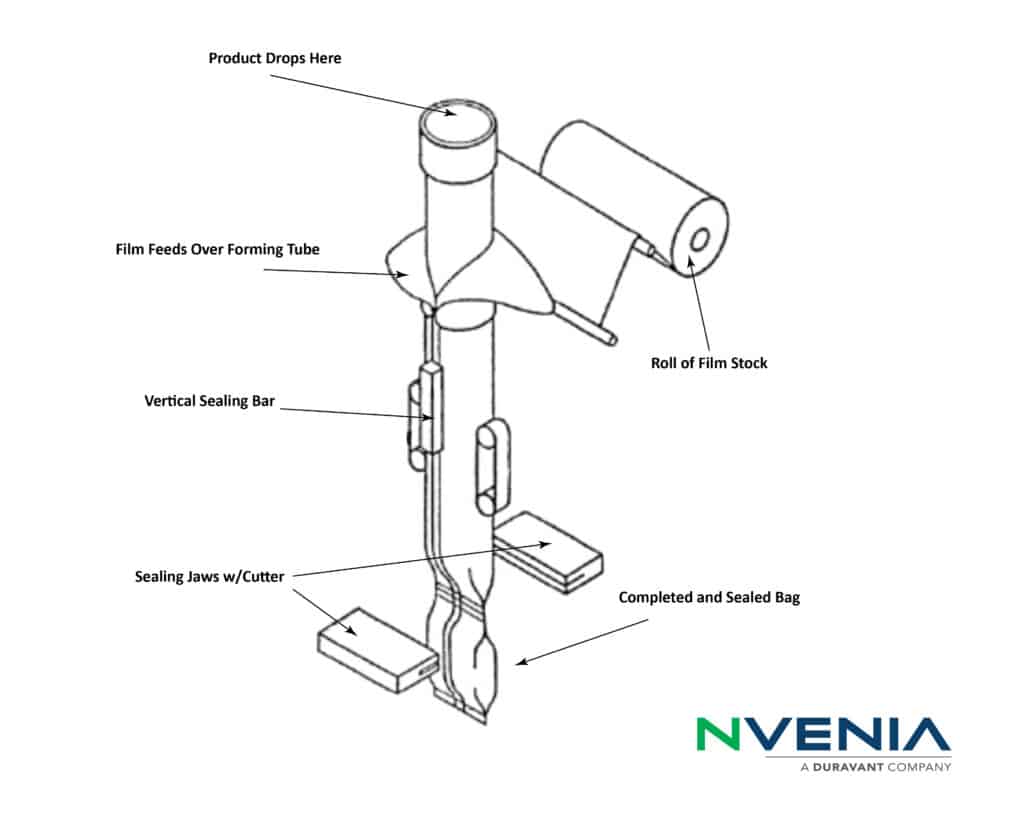 To do that, the VFFS machine feeds the film over a cone shaped tube called a forming tube, which shapes the film into the correct bag size and seals the bottom, as well as the vertical seam where the two edges of the film come together.

The forming tube’s design sets the width of the bag, with the length ultimately controlled by the bagging machine itself. To switch over to a different bag width, an operator can quickly swap in a new forming tube.

There are a few different types of seals, but the two basic types used are a lap seal and a fin seal. In a lap seal, the two edges of the film overlap and are sealed together, with the back of the top side sealing to the front of the bottom side.

In a fin seal, the forming tube brings the edges of the film together so that it seals the inside surfaces together.

By its design, a lap seal uses less film – the equivalent of the width of the seal – on every bag. However, some films have special barrier layers, such as odor, heat, etc., which don’t allow for the bag to seal properly unless a fin seal is used.

Films for vertical form fill seal machines may come with various features, such as zippers or gas release valves to keep products fresh.

Step 2: Dosing and Filling the Product

Those two machines are synced electronically, so that as soon as the bag is ready, the product is dropped in automatically.

Once the product has dropped into the bag, the top is sealed, and the bag is completed and cut away.

That top seal on the first bag becomes the bottom of the next bag, and the process repeats.

Depending on how they will be used, the machine may also add a date/batch code, a tear notch for easy opening, or a hole punch/euro punch to allow it to hang on a wall display.

From there, the bags are collected and organized into cases for shipment to stores or end-users.

nVenia designs and manufactures a full range of vertical form fill seal (VFFS) bagging machines under our OHLSON Brand, with options to accommodate nearly any type of bag requirement.

Please request a quote or give us a call to learn more!