How Does a Multi-Head Weigher Work?

Multi-head weighers (also known as combination scales) are the equipment standard for weighing applications in a variety of industries.

But for people who are evaluating their first packaging automation project, or even starting with a semi-automatic packaging system, the concept is something which might benefit from some explanation.

At a basic level, a multi-head weigher takes bulk product and weighs it into smaller increments according to the weights programmed into its software.

That bulk product is fed into the scale through the infeed funnel at the top, generally via an incline conveyor or a bucket elevator.

The top cone and feed pans vibrate, and gently move that product out from the center toward the buckets mounted around the edge of the scale. The system has various options and software settings which are adjusted for the product and fill weight.

For some applications, the scale will have dimpled steel contact surfaces, which provide less surface area for sticky products – such as gummies – to stick to. The sizes of the buckets also vary based on the product being weighed and the fill amount. While every application is different, bulkier product and/or larger containers generally leads to larger buckets (while the inverse is also true).

Each of the weigh buckets has its own load cell, which are constantly weighing the amount of product they contain, all while product continues to feed into them.

In order to reach the target weight, the software of the scale chooses the sum of a combination of buckets which add up to the correct amount.

An example of how this might play out is depicted in the figure below. With the target weight of a particular package set at 100 grams, the system evaluates all 14 weigh buckets and chooses to drop buckets 1, 3, 10, and 12. A fraction of a second later, it will reevaluate all of the buckets and choose the next combination. 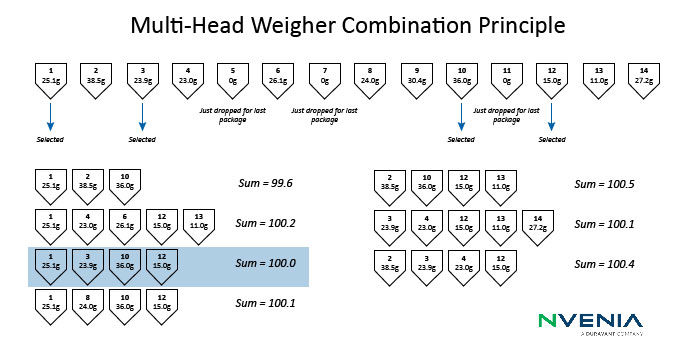 The two main advantages of combination weighers are speed and accuracy.

Each of the load cells on an nVenia OHLSON Brand multi-head weigher is extremely accurate, with accuracies down to fractions of a gram. With additional checkweighing and other modifications, that accuracy range can be tightened up even further.

In addition, a multi-head weigher does not face the same issues with weighing clumps that might be present in a linear scale.

The other main advantage is speed. Because each of the heads on the scale are constantly replenishing and weighing the amount of product they contain, they can move much faster than an operator using a manual scale.

Standard multi-head weigher models under nVenia's OHLSON Brand range from 10 to 24 heads.  The more weighing heads a scale has, the more options its computer has to create combinations which hit the correct amount; ultimately resulting in higher possible speeds and better accuracy.

Have a weighing need? Request a quote and we’ll help you find the best weigher for your product.